At the beginning of September we had the pleasure to take part in the Shipka Fest 2022. A diversity of colours, crafts and music transformed the town of Shipka for the 4th year in a row.

The event, which took place in the Ethnographic museum Kurmanalieva house, started with flames and iron sounds, where the blacksmiths showed us the art of knife-making.  Slowly, different craft-people appeared, each with an unique essence and technique that filled the space with different skills.

Among them, we found the ancient tradition of basket weaving, the cold method of soapmaking, as well as the secrets and specifics of herbal poultice making. The smell of different lavender and rose oils surrounded the museum the entire weekend.

We were lucky to observe the traditional Bulgarian methods of jewelry making, using horn and nacre or beads. Meticulous and precise hands also showed us ancient methods of knitting and embroidery. Workshops in woodwork and carving developed the creativity of many kids and adults who also took part in needle felting, henna drawing, and the Wool story.

We welcomed the traditional folklore dancers of Shipka, who introduced their performance with joy and energy!

Music accompanied the festival all the time. On Friday, we had the opportunity to hear the mystic sound of The Flying Nomads followed by the nine different instruments of Soulfia, evolving and mixing them, with a very strong power. These two groups were introduced with a poetic song sung by the lovely voice of Ivet, accompanied by guitar.

During the festival the jam sessions took prominence between every event, where everybody was able to participate.

The art exhibition “Svetlina for Shipka” was shown inside of the museum, as well as the Photography exhibition “100 years ago with the photography of Antip Obushtarov”, which is expected to travel to London after Shipka.

A delicious vegetarian kitchen filled the stomachs of the grateful people of the event!

For the end of the festival, Sunday involved repairing the roof of the community center in  Shipka. A lot of hands worked together to achieve a magnificent and resistant roof. The documentary film Kaval Park (USA, Bulgaria, 140’’) directed by Bogdan Darev, was projected saying goodbye to the entertaining 3 days! 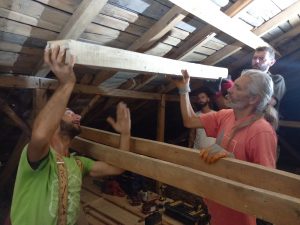 The month of August start with a new companion, a dog that we found in […]